During my time with Creative Culture, I created the content calendar (Twitter/LinkedIn) to cover for more than half a year. I’ve also researched, fact-checked and written a handful of posts for the company’s blog. All of them focused on different cultures, transcreation and/or travel.

Please find the links to the selected posts below. 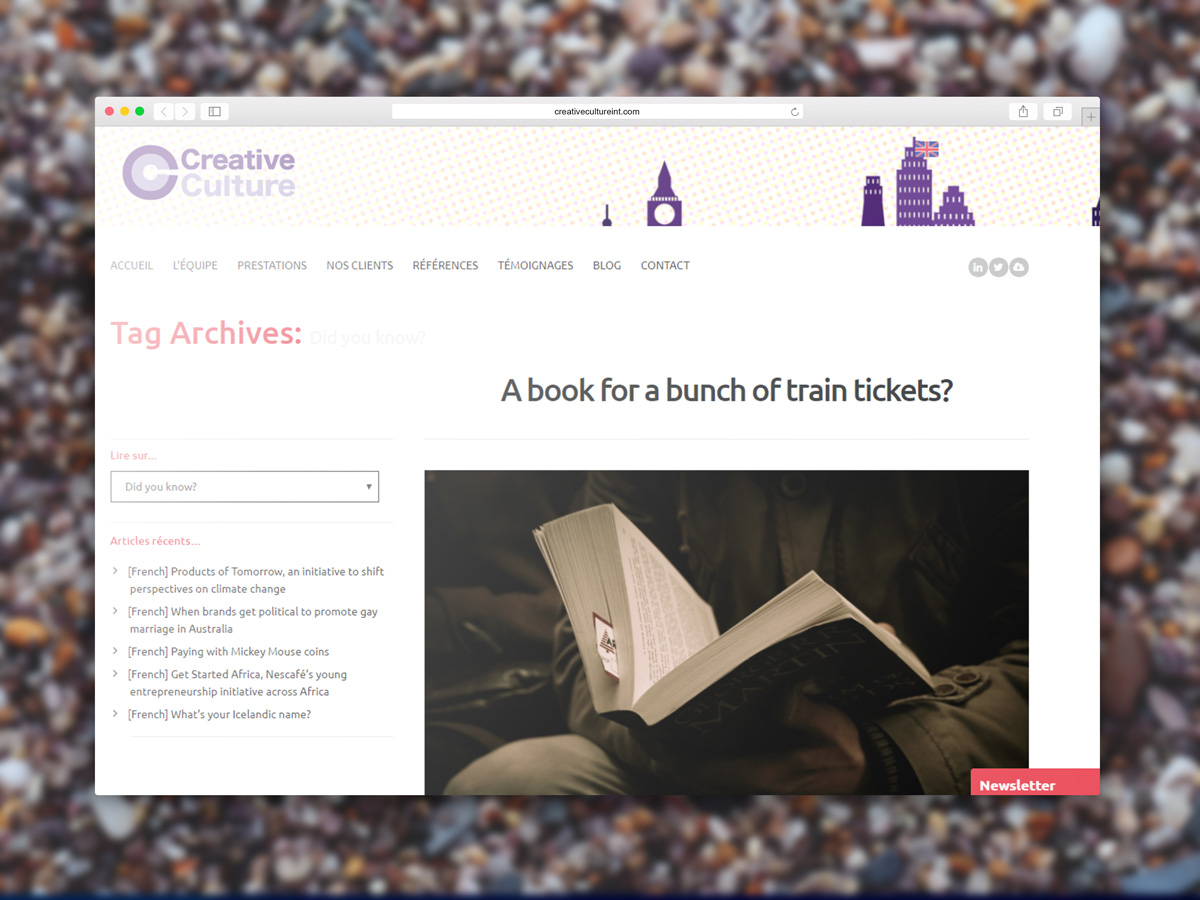 A book for a bunch of train tickets?

A book for a bunch of train tickets?

If you often read while commuting, you’ll be delighted to hear how a Brazilian publisher tried to encourage their audience to read!

According to a survey conducted by the Instituto Pró-Libro in 2015, the average Brazilian only reads two books per year. To address this issue and convince more people to read, L&PM Editores and Agência Africa came up with a campaign that connected the practical side of travelling with the pleasure of reading.

They created “Ticket Books” that provide bookworms with 10 free rides on public transport, setting up distribution points at stations just like ticket offices. The idea is pretty simple: there is a pass attached to the book cover that can be scanned at the turnstile. Buying the book therefore allows you to roam around the city with your enough credit for 10 journeys, as long as you have your book! Once you’ve used up your free transport allowance, you can still top up the card and re-use it. You can even pass it onto a friend, encouraging them to read while they travel! The promotional book series included books such as “The Great Gatsby” by F. Scott Fitzgerald, “The Art of War” by Sun Tzu, “Sherlock Holme: The Hound of the Baskervilles” by Sir Arthur Conan Doyle, “Hamlet” by William Shakespeare and “Murder Alley” by Agatha Christie.

The idea was very popular in São Paolo – 10,000 copies were snatched up by commuters in no time! If you were given Oyster card season tickets with a book… which book would you choose?

Vegemite: how to become a national brand

Vegemite: how to become a national brand

Vegemite is as symbolic to Australia as the Sydney Opera House and koalas… but do you know how it became so iconic?

During World War I, it acted as a substitute to Marmite. In the 1920s, it was marketed as a paste that was “delicious on sandwiches and toast, and improving the flavours of soups, stews and gravies”, but as the British equivalent of the paste was already well-established in the market, people were rather reluctant to try a new, local product. The brand fought for 14 years… and came up with a limerick competition in 1937 with prizes like Pontiac cars. Successful campaigns were endorsed by the British Medical Journal.

Originally promoted as a healthy food option for children, due to its high B-vitamins and potassium levels, in the early forties its role in keeping soldiers healthy was emphasised. After the war, in 1954, a new advert was released with a song “Happy Little Vegemites” sung by happy, healthy kids. The radio advert and TV clip were so successful that they were remastered and brought back in 1980s, and again during the 1990s and 2000s.

In 2007, Kraft, the current manufacturer of Vegemite, announced that they had been looking for people who acted in the very first advert to remake the advert. The buzz started spreading through the media; the kids from the ad were found within eight days, appearing in various features, interviews, and valuable PR for the company. The 50-year reunion campaign won the Arts, Entertainment & Media Campaign of the Year award at the November 2007 Asia Pacific PR Awards.

Perseverance, consistent values and interesting ideas for a campaign – is it easy to become a national brand?

Italians have always been recognised for their mouthwatering ice cream. But, surprisingly, they lost the competition for the title of European ice cream capital to… Vienna in Austria!

According to the Austrian Chamber of Commerce, there’s one ice cream shop per 15,000 people. In Vienna, there are 154 ice cream shops, and an endless number of coffee shops that also sell the delicacies that literally melt in your mouth.

The ice cream trend started in Austria around the mid 19th century. Back then, many Italian ice cream makers settled in Austria and continued to practice their craft there. As Austrians have always been fond of cakes, they welcomed the new delicacy very warmly. The people of Vienna soon started organising a festival to celebrate every dessert that includes ice cream, which takes place in August, in Burggarten.

Not every new entry to the market was as successful as Italian ice-cream; a while ago, Dunkin’ Donuts decided to close down all their branches in Austria after 3 years. Despite Austrians’ sweet tooth, the company failed to grow successfully. Why was that? Doughnuts are not very popular in Austria, as there are many local shops that serve traditional cakes, filled with common ingredients (like Topfengolatsche – dough filled with cottage cheese  – or Linzer Stangerl – a type of puff pastry dipped in chocolate and filled with apricot jam).